With less than a week to go until the Judicial Review into the ‘preemptive’ arrests begins at the High Court, Daniel Randall, one of the Charing Cross 10, speaks of his experience.

On the day of the Royal Wedding, myself and nine friends were detained outside Charing Cross station before being arrested and taken to Sutton police station, where we were held until we were eventually released without charge. We believe this happened because we are republicans.

We had gone to Trafalgar Square on the morning of the wedding because we had an event on Facebook announcing a republican protest. When we arrived, the massive numbers of both police and private security (as well as the sheer volume of people in the square) made it clear that holding any kind of protest would be impossible. Whoever had organised the event on Facebook had obviously reached the same conclusions as there was no sign of any republican presence whatsoever. We decided to go instead to the street party in Red Lion Square, Holborn, organised by the pressure group Republic. While we were waiting outside the station for another of our friends to return from the shops, British Transport Police (BTP) officers became interested in who we were and what we were doing there. They searched us under Section 60, finding the homemade placards one of us had brought and a loudhailer. As the BTP was searching us, one of their officers said “the Met have been going round, rounding up people before the wedding, to make sure there’s no problems” (see here). We’d heard about the squat raids that had taken place the night before, and the BTP officer’s comment confirmed our suspicions that the police were using pre-emptive arrests as a political tactic to keep republican voices off the streets and out of the public eye.

The BTP told us that the Metropolitan Police also wanted to speak to us, so detained us outside the station until a group of over 20 officers, including members of the Territorial Support Group, arrived and placed us in a “kettle”. After some time, they moved in and arrested us. We were told we were being detained arrested to “prevent a breach of the peace.”

We were held in handcuffs, without being told where we would be taken and if we would be charged, until we were marched onto a (unmarked, civilian) coach and driven to Sutton police station. Only four of us were booked into cells; the rest were held (still in handcuffs) in the yard of the police station. Eventually a senior police officer emerged to tell us they had decided the threat had passed and that we were free to go.

We believe that what happened to us was unlawful, and that it was part of a politically-motivated policing operation that was also unlawful. The powers accorded to the police by Section 60 of the Criminal Justice and Public Order Act allow them to make arrests in cases in which a breach of the peace is “imminent”. Nothing we did or said, or anything in our behaviour, could possibly have given them reason to believe this was the case. We were arrested because of our political opinions and the belief that, because of those opinions, we might do something which might cause a breach of the peace at some point in the future.

The implication of our arrest was that, on 29 April 2011, it was illegal to be a republican within a designated area. We believe that what happened to us, and other Royal Wedding “precrime” arrestees, has dangerous implications for democracy and civil liberties in Britain. The British state cannot be allowed to get away with attacking freedom of thought and expression in this way.

I was one of five people dressed as zombies who were arrested for ‘potential breach of the peace’ in London on the 29th of April, 2011 – the day of the royal wedding. This is my account.

My friend Chris Farnell runs a zombie blog, and had heard there would be an event involving zombies for the Royal Wedding. As Chris lives in Norwich and I live in London, he asked if I would go along to take pictures and report for him. I had heard that Queer Resistance were some of the organizers and that there would be a gay zombie wedding as part of the celebration. I wasn’t sure on any of the finer details, but it sounded like fun.

I heard the event would be 10:00 – 12:00 at Soho Square. I had noticed that the Twitter hashtag #RoyalZombieFlashmob wasn’t moving at all that morning, but I didn’t think much of it. 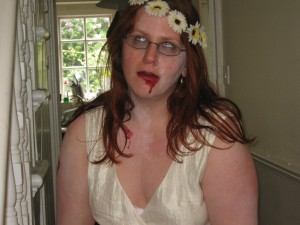 Me, dressed as a zombie bridesmaid, about to go out reporting

I got zombied up in a bridesmaid’s dress, headband of white flowers, dark circles around my eyes and some ‘blood’ (lipstain) running down my chin & from a wound in each arm. My housemates said nice things about my costume and told me to have fun. I left my house in Archway at about 9:45.

On the way my mother rang and asked what I was up to. I told her “off to report on a zombie flashmob for the Royal Wedding”. She was tickled and said it was nice to see the tradition of alternative celebrations was still going strong. “Don’t eat any brains I wouldn’t eat, Kiddo.”

En route my friend Mary, a journalist with more than a passing interest in zombies texted saying she’d heard that the organizers had been arrested the night before, and be careful. END_OF_DOCUMENT_TOKEN_TO_BE_REPLACED